Welcome to the cloister of the Cathedral of Barcelona!

The city of Barcelona was soon to receive the light of the Christian faith. The martyrdoms of Santa Eulalia (former patron saint of Barcelona) and San Cucufate, during the persecution of Christians, testify that there were Christians in Barcelona since the end of the third century.

In the 9th century the Gothic cloister was built in the same place that occupied the Romanesque cloister.

There are two ways to access the cloister; By the exterior doors of the Pieta and Santa Eulalia or by the door of the interior of the cathedral made in marble and located on the cruise. 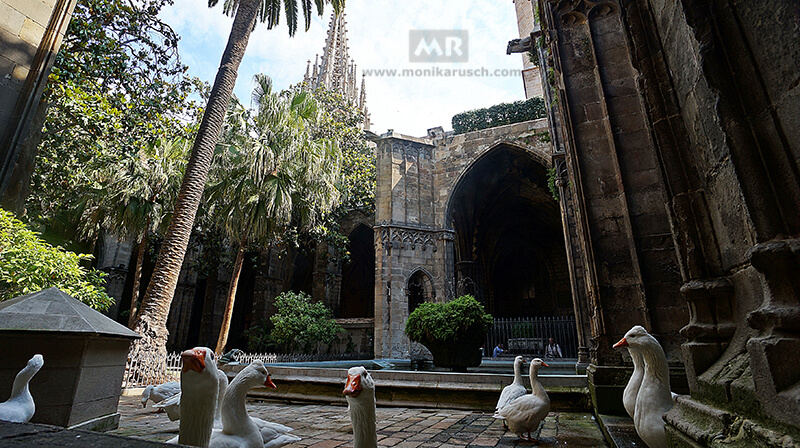 It is curious to see animals inside a cloister but Barcelona surprises in every way.

In the cloister of the Cathedral there is a pond with a spout. There are thirteen hollows, as many as, according to tradition, had Santa Eulalia when she was martyred.

The legend of Santa Eulalia 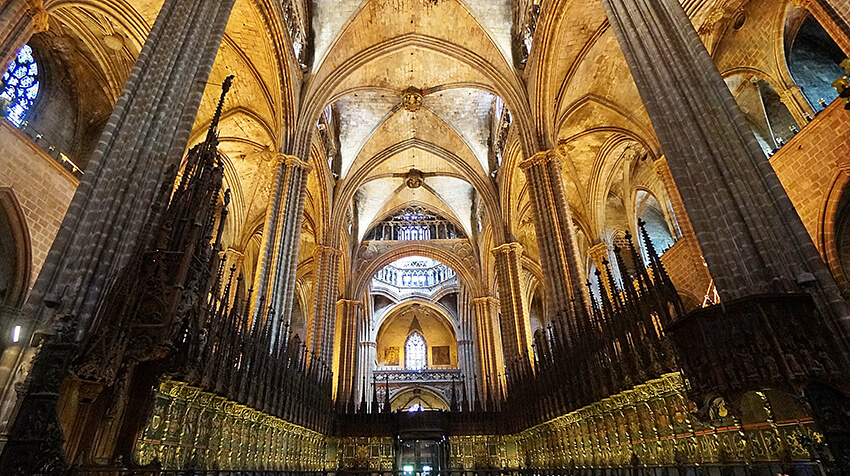 The legend, dates back to Roman times …

According to Christian tradition, Eulalia was a child, educated in Christianity, who lived on the outskirts of Barcino in what is now Sarriá, at the end of the third century. At age 13, during the period of persecution of the Christians, Eulalia escaped from her home and went to seek the governor of Barcino to recriminate the repressions. The governor, in the face of the girl’s refusal to renounce the Christian faith, condemned her to thirteen martyrdoms, the same as her years.

According to legend, during his crucifixion there was a snowfall (it was Spring), covering the purity of her naked body. Also according to popular tradition, at the end of their prayer that the Lord took it to His Kingdom, people saw a white dove flying out of her mouth. 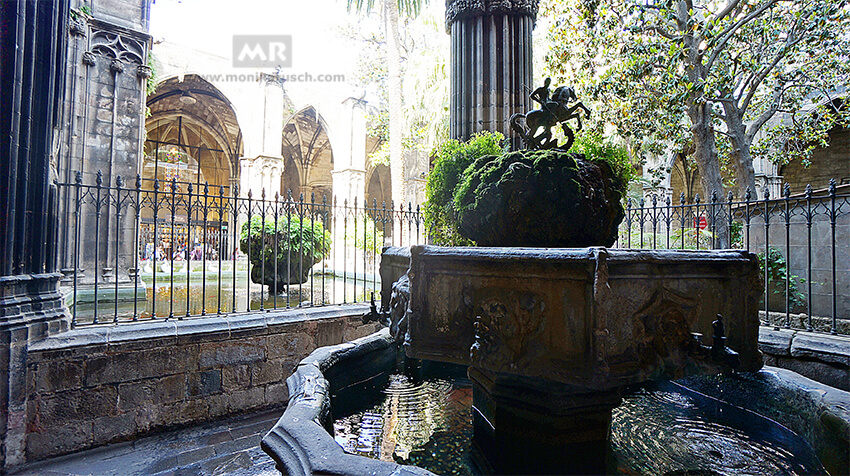 The cloister has archivolts decorated with geometric motifs. On the capitals, the imposts and the abacuses there are sculpted themes of the Old and New Testaments and fights of the man with wild beasts. On the archivolts there is added a later gothic crescent that helps to integrate the door to the set of the cathedral.

In the center is a garden with magnolios and big palms and running around there thirteen white hollows.

We also found a fountain with a statue of Sant Jordi (one of the Catalonian patrons) killing the dragon.

The word cathedral is synonymous with Sede and is the place where the chair of the diocesan bishop resides. The place from which teaches and explains Christian doctrine to the faithful.

The Gothic Cathedral of Barcelona began to be built in the year 1298, on the previous Romanesque temple.

Gothic art, the splendid gothic and baroque altarpieces, the marvel of the choir, the baptistery and the tomb of Santa Eulalia stand out.

In 877 this basilica solemnly housed in one of its chapels the relics of Santa Eulalia, which, hidden so that the Arab invaders of our peninsula (711) did not desecrate them, were found miraculously. 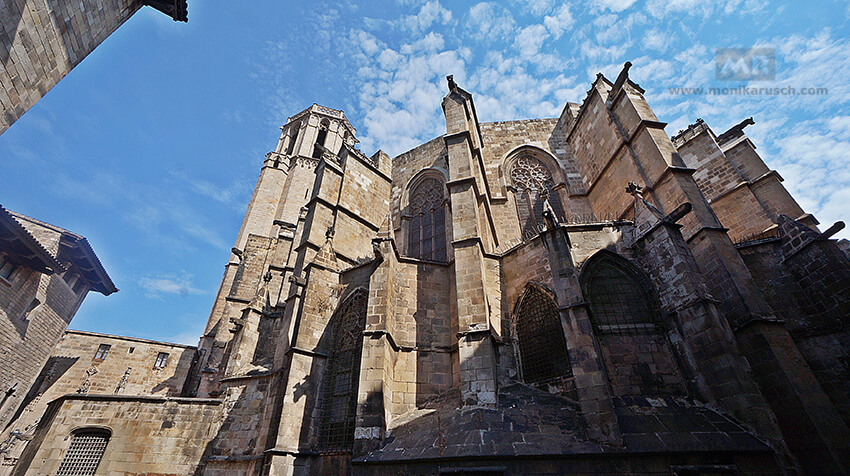 Today, the Cathedral of Barcelona is one of the most emblematic and visited buildings in Barcelona; receives, annually, the visit of three million people. That’s why we wanted to make a video of this beautiful building; So that we all have the opportunity to feel inside a building as important of Barcelona as the Cathedral.

What do you think? Leave us your opinions … We read us soon!

2 thoughts on “The Cathedral of Barcelona”